We arrive in Festival Leisure Park and struggle to pass through to the opposite end, to today’s venue. One road is blocked by a delivery truck, another has lots of cars parked alongside it, despite almost empty car parks next to Premier Inn, Holiday Inn and Travelodge. We eventually manage to get to the corner of the Park by A127, where, nestled between Premier Inn, lake with wakeboarding ramps and cables, skips and temporary fencing is the lunch haunt for today: The Quays. Not being in a particularly exploratory mood, we opted for another, after The Four Seasons, establishment in the Hungry Horse chain. Expected were rock-bottom prices, large portions, and questionable food quality. What did we find?

First impression, from the outside, was mixed, at best. Noise from A127, aforementioned skips and cars parked everywhere did not imbue one with a sense relaxation. There is a deck with lake view, though the “lake” is heavily adapted for water sports and again does not offer any natural beauty; besides, the view is largely obscured by brambles that surround the railing, with rubbish strewn in them. As was the case in The Four Seasons, dirty plates are left on the tables outside. Finally, Z was upset to find many bee/wasp traps around the decked area. We went inside.

Inside the bar is large and quite pleasant, with restaurant and bar areas. We took a cosy table under the staircase, which was in the restaurant part. This meant that we had to enquire the waitress about available beverages, and she had to run back and forth to check what’s still left (they apparently ran out of booze and were expecting a delivery on the next day), including bringing us a bottle of Hop House Lager to confirm with us whether it’s an pale ale or not (it is not). It would have been much more efficient if we just went to the bar. It turned out in the end that, alongside the ubiquitous Greene King IPA (called just “IPA” in these parts), they also had Ruddles County (also by Greene King), which we went for, and which was pretty decent.

Food options were plentiful, as long as what you were looking for was beef. We were not, so that simplified the choice somewhat. There was a deal of 2 vegan mains for £10, I opted for chickpea and sweet potato curry – pretty tasty, except for poppadum, which, although broke easily, had an unpleasant, chewy texture. Z, feeling more adventurous, tried fishless fish and chips. The interior of the battered “fillets” smelled vaguely of fish, the texture was more mushy, it was hard to figure out what it was, exactly. I prefer to eat things of more obvious provenance. The undressed salad and sub-standard chips did not improve things, so Z will not be having this again. The curry, on the other hand, is a keeper, if vegan is the name of the game.

All in all, the experience was mostly in line with our expectations. The standout feature of The Quays, the lake view, is not something that would entice me to come back. If I were in a mood for Hungry Horse – which, frankly, would be a rare occasion – I’d rather go to The Four Seasons, because it is closer. 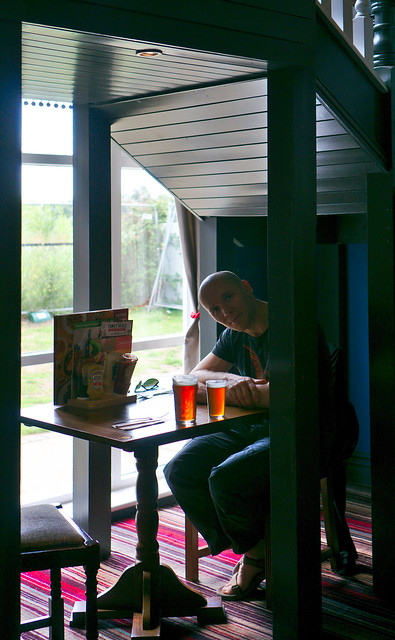