The Olde Dog Inn was a pleasant break from our recent exploration of chain pubs in the town centre. Located in a tiny village of Herongate Tye, The Dog has all the trappings of a country pub, with low ceilings, crooked walls, Tudor beams, a number of small rooms with tables, and a decent selection of beer. If there is one thing that spoils this rustic inn charm, that’s the music; I suppose the 1980s pop hits are appreciated by the clientele though, with all of the guests on this Wednesday lunchtime being in their 50s or 60s.

The ale selection is wider than would appear at the first glance. On the counter, other than the lagers, without which no Essex pub could survive, there is an Old Dog IPA, brewed by Crouch Vale, and really quite good, Abbott (meh), and Icebraker – craft pale ale, apparently brewed by Greene King (ewww!), but actually very pleasant, with strong elderflower aroma. Beside those, however, there are kegs lying on a shelf behind the bar, with some less common guests. I spied Crouch Vale Brewer’s Gold, an awesome, light and floral ale, there was also one other option that I do not remember. All that is to say, in terms of ale Old Doge is miles beyond most of the pubs we’ve visited in recent weeks.

Food can be had in the bar or in a dedicated restaurant area, with table service. The menu is relatively compact and to the point: pub classics, such as fish and chips, burger, bangers and mash, fried sea bass, lamb shank. Pretty short on vegetarian options, and nothing vegan, but the kitchen was more then happy to accommodate Z’s dietary requirements by preparing a vegan version of mushroom and spinach risotto; Z said it was great. Me, in the absence of a clear favourite I usually default to a burger, and more often than not am disappointed by its lack of juiciness. Say what you want about Byron, but they know how to make a tasty burger. The Olde Dog tries to address the problem of dry patty in an unusual way: by drowning the contents of the bun in melted cheese and tartar sauce. I honestly don’t think I’ve before encountered a burger with tartar sauce, and that’s perhaps for the better. All in all, however, it was one of the better burgers I have so far eaten on this quest, but not quite justifying the price tag of over £12. Also, I would prefer for the beef patty to stand out on its own, so to speak, and to be the focal point; here it seemed somewhat lost among the other fillings.

We liked it at the Doge, and it is a strong contender for the best nearby – not really local, we still have to drive. The prices are perhaps not excessively high, but it was twice the cost of the Weatherspoons. Was it twice as good? That really depends on what you are looking for: if for the country pub ambience, then (save for the music), it ticks all the boxes.

Z is busy, so no scores this time round. Instead, you’ll get a photo that is not ridiculously blurry. 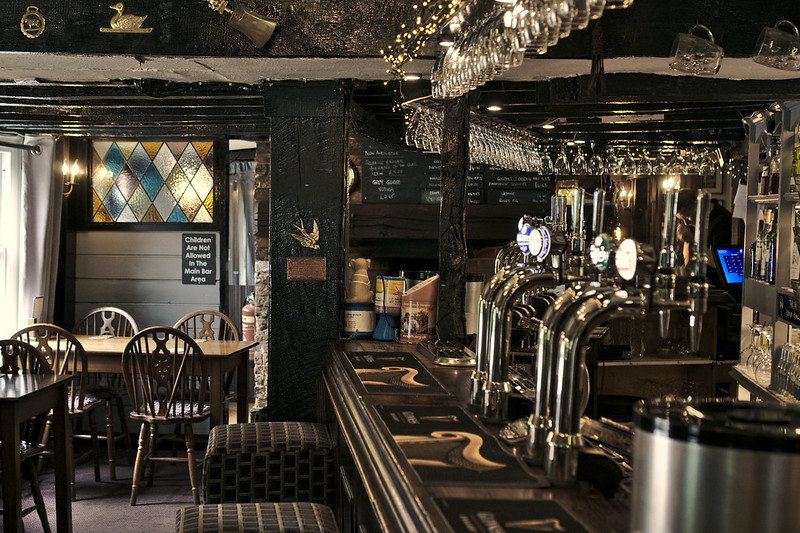