This week we had a place called The Owl and Pussycat in our schedule, but a quick look at Google reviews suggested it’s a town bar similar to the Plough and Tractor, i.e. lager and sports on TV, but no food. Perhaps some other time then; for lunch we went to the Honey Pot Harvester instead.

Yes, a Harvester is not really a pub. But then, the criteria I used for the quest are far from precise. For example, there is a historic pub building in a lovely spot on top of the hill close to us; long-time locals sometimes refer to it as The Crown. It used to be a Harvester, but a few years ago it got converted to a Miller&Carter steakhouse. Now it is a restaurant with glitzy furnishings and smart casual dress code, but also overstretched waiters and quite mediocre food (steaks are good though). It is also the only place I know where crème brûlée is just a bowl of custard, without the caramelised top, because health and safety prevents the kitchen from operating the torch. So, it didn’t make the list. But if it still was a Harvester, who knows?

In the case of the Pot, it manifestly is not a pub. Set between the sprawling car parks of Basildon’s infamous Festival Leisure Park, and a busy road, just next to TGI Friday’s, it closely resembles a provincial American diner. There is a small bar section, with a choice of lagers and even mojito on the tap, but mostly it is just a chain restaurant, with table service and vaguely rustic decor. The interior is actually quite pleasant, despite too much reliance on artificial plants, and Z found the toilet to be lovely.

Ales on tap they have none, but there is a bottled Ghost Ship (good) and one more, which escaped me. The menu is a standard chain affair, with relatively expensive, £10-12 burgers, and a wide selection of alternatives, including a handful of vegetarian and vegan options. The lunch set can be a good value, under £10 for two courses, but this time I resisted the temptation of a burger or chilli, and went à la carte for a vegan tagine with aubergine. It was okay, although any semblance of Moroccan cuisine was very superficial, with some kind of chilli being the main spice in the mix. The side of hummus was served with a tortilla substituted for a more middle-eastern type of flatbread, which perhaps was an attempt at fusion, but came across more as either ignorance or cost-cutting. I didn’t feel it was worth the £11 or so they charged for it. Z had piri-piri tofu skewers with a salad; cheaper, but not something I would consider having again. There was also a salad buffet, included with every meal. The coleslaw was okay, I was not impressed by the other options available.

As far as chains are concerned, the Honey Pot beats Moon on the Square on the ease of parking and cleanliness, but substantially loses on the ale selection, value for money, and, perhaps most importantly for this quest, on pubiness. It is quite close, both in terms of the location and the standard, to The Noak Bridge, with the latter again offering more pub-like ambience. Unless there are items on the Harverster menu (sundaes, perhaps?) that particularly strike your fancy, there are better options around. 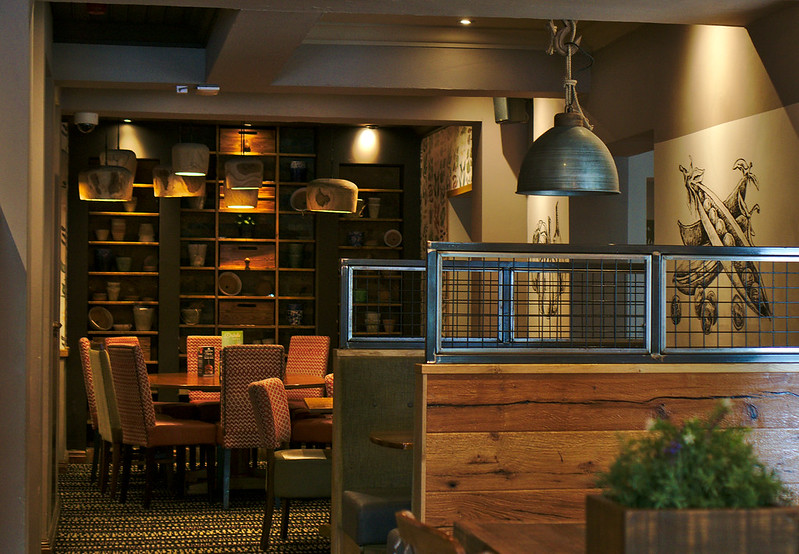