SW Essex Pub Quest: The Dog and Partridge in Orsett

Last Sunday I visited The Four Seasons again, to watch the England vs. Cameroon world cup game. There were some pleasant and unpleasant surprises. The pleasant one was that the ales on tap have changed, and they now had Yardbird pale ale, from Greene King, but pretty decent. The bad was that even though the game was shown on the TV screens around the bar, the sound was off and noone paid any attention. England. Playing the round of 16. In a football World Cup. In an Essex pub. Noone paying any attention. Unbelievable. I left at half time, for – as one online comedian put it – the fear that the lack of atmosphere will cause my eyes to pop out, like in the Total Recall movie with Arnold Schwarzenegger.

This week we are (almost) in Orsett. For an Essex village south of A127 Orsett is quite posh, it has an airstrip and even a small hospital, much nicer than the infamous Basildon hospital. Sadly, the fortunes of Orsett have recently turned for the worse, as it was announced that the planned Lower Thames Crossing motorway route will pass just to the West of it, likely resulting in increased air, noise and light pollution, and reduced property prices. Meanwhile though, there are a few pubs in or around Orsett that we were planning to explore, and today it was the turn of the Dog and Partridge.

The pub occupies a solitary building by the busy A128, also known as Brentwood Road. There is a bar area to the front and a restaurant at the back, very bright, with the glass sliding doors revealing the focus pieces of the entire estate – a garden with a sizeable duck pond. It did look nice from the inside, although I suspect that sitting in the garden might not be as pleasant due to it only being separated from A128 by a hedge over whose top we could see the tops of lorries passing by.

The choice of ale was a nice surprise, as there were two available, and neither was Greene King. First was Ridley’s Rite, a very nice bitter, the second was some botanical variety, I do not remember exactly, probably from Ventnor, also quite okay. One weird thing was that although they seemed to be real ales, both were served chilled, like lager or craft beers. Perhaps that has something to do with the local taste, which seems to prefer lagers.

There was reasonable choice of food, mostly typical pub fare, with very limited veggie/vegan options. The kitchen was happy to accommodate Z’s dietary requirements, although the vegan burger was served with a non-vegan mayo coleslaw, which was a bit of an oversight. The burger was mediocre, and Z didn’t feel well afterwards, but that happens often and might not be the food per se, so do not take it as any indication of safety or hygiene concerns. I tried a chip from Z’s dish and there was something odd in the taste and texture, so maybe it was not fully cooked.

My chicken fajitas were served sizzling, perhaps a bit too charred, but eadible. The guacamole looked like the grayish-green semi-liquid paste you can buy in squeezable tubes in supermarkets, salsa was probably of similar provenance. Not a culinary highlight, but definitely not the worst thing I’ve eaten in a pub (I might discuss that experience some other time). At around £12, a bit on the expensive side, for what it was.

In summary, Dog and Partridge might be an okay place for a pint – that is, assuming you are okay with chilled ale, and if it’s just one, since the only way to get there is to drive. It might also be good for admiring the pond from behind the glass, but the combination of location, decor, ambience and food does not add up to something that leaves long and pleasant memories. In the months to come we will see how other Orsett pubs fare in comparison.

The Z-score is back this week, as is the crappy photo. 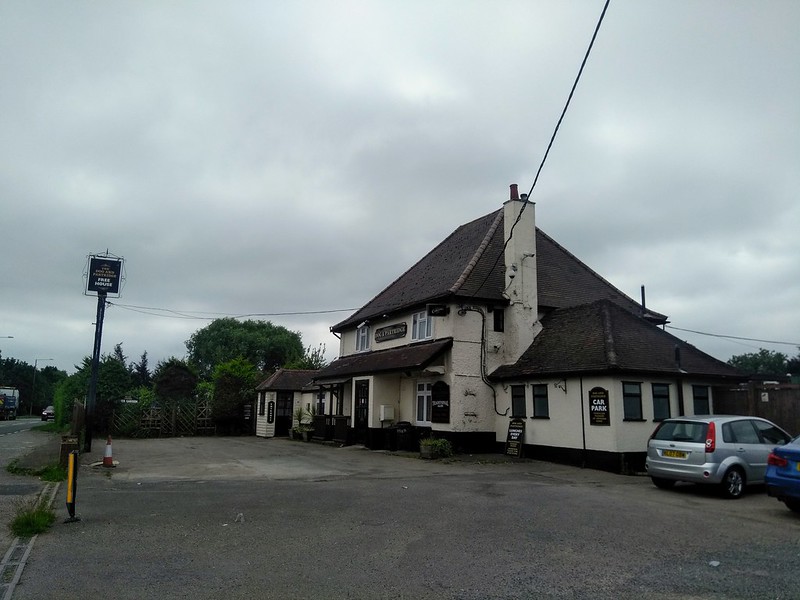