A bonus pub visit this week. On the hottest day of the year so far, we went to Thorndon Country Park. It is a lovely area, where one can walk for hours among ancient woodland, dense rhododendron groves, forest clearings and meadows, or just lie down on a grass and read a book (which we did). There are two entrances and car parks, the northern one, from the Brentwood side, which is where we usually go, and the southern one, by A127. This time we used the latter, and while the park grounds were spectacular, the proximity of a busy dual carriageway and, perhaps more importantly, a function venue blaring dance music, made the visit less enjoyable than it would have been in quieter circumstances. In the future we will stick to the North.

On the way back we passed by one of the pubs on our list, and Z was hungry, so we stopped by. The Boar’s Head is a historic-looking building close to the centre of Herongate village, but in a reasonably quite location, by a minor road leading from Herongate to Billericay; about three-quarters of a mile down the road you’ll find The Olde Dog, which we tried a few weeks back. We were lucky to turn up at 5 PM, which is quieter time at pubs, so we had no trouble finding a nicely shaded table outside. With the temperature approaching 30°C I was not interested in food, so settled on just rhubarb crumble sundae (very nice), but I must say that the menu looked very enticing and I’d be eager to visit again and try their burger with salt beef or the ribs. As for Z, there was a separate veggie menu with a few very interesting items in it, and they were really happy with a seasonal veg bowl with harissa rice balls. I found the speed at which it was served somewhat suspicious, suggesting a microwave, but the primary customer was satisfied. They had three cask ales: Greene King IPA, Yardbird – which I had a week ago and quite liked, and a Black Sheep, so not too bad overall. Exceptionally, due to the weather conditions, I opted for something colder, and partook in Z’s pitcher of Pimm’s.

We liked the Boar’s Head a lot, and plan to visit again. This endorsement must be qualified first by me only having a dessert and basing the judgment about food mostly on the contents of the menu and on what I could spot on other patrons’ plates. Second, the external circumstances play a big role, and we are likely more generous on a nice, sunny and leisurely day like today. Who knows, perhaps if we visited The Dog and Partridge on a day like this, instead of gloomy Wednesday, we’d judge it less harshly? In the end that does not matter: what does is that we had a very pleasant stop-over at Boar’s Head this time round. 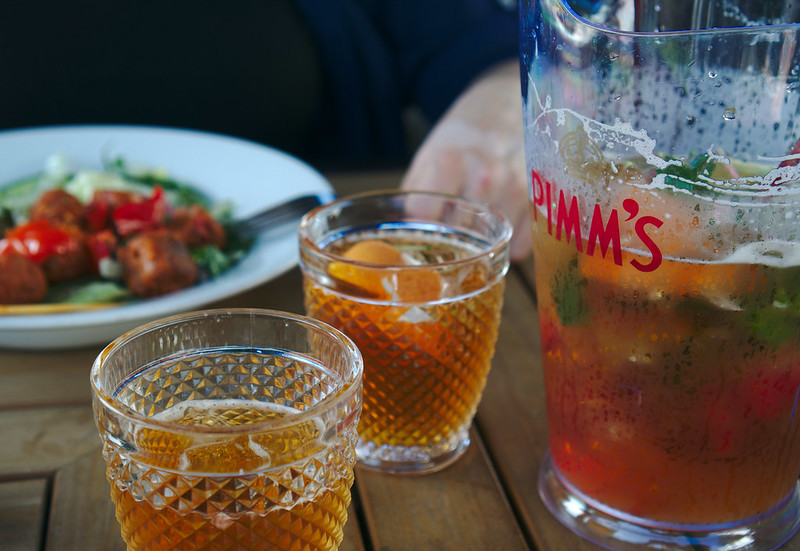