There is often that one ingredient. You’re in a supermarket and a vegetable you don’t normally eat catches your eye, or it’s a jar of some obscure substance that suddenly seems like a promising kernel around which you can build a dinner. Or, it’s something rare, that you got from someone and sits in your pantry waiting for that moment of inspiration. This evening’s dish is going to be of this kind. But, to make things a bit more convoluted, “the one” will be different for me and different for you.

So far, the approach I’ve taken in these posts was to present what a migrant of Polish origin, but open to influences from all over the world, may concoct given the ingredients commonly available in British supermarkets. This time round we’ll make it closer to my native cuisine, hence more challenging.

In my case, the trigger for this dish, the one ingredient everything was supposed to be build around, was a tenderloin of wild boar which I purchased at the Billericay Farmer’s Market. For a local though, a rarer item might turn out to be wild mushrooms – boletes, to be more specific. Of these, the easiest to encounter among your local supermarket’s shelves are dried porcini. These will do – in fact, they are typically excellent – but you’ll need a couple of handfuls, so it’s going to be expensive. My supply originates from the countless boxes of mushrooms that my parents pick, dry and store, so this was the easy part for me.

Other ingredients are mundane. Two onions, Two white rolls – paninis are a good choice. A cup of soured cream, mild olive oil – or just vegetable oil, if we want to stick to orthodox Polish ingredients, where olive oil is virtually unknown. Some black pepper. Some wheat flour, Yolk of two eggs. New potatoes for the side. Monasterio de Santa Cruz to drink (other good red should do just as well). Lancashire and Blue Lancashire cheese to have something to finish the wine with.

Preparation couldn’t be easier: just fry everything and then bake it. First, soak good two or three handfuls of the dried mushrooms in a very small amount of water, and once soked, boil briefly. Drain, but keep the liquid. Slice the mushrooms into thin bits. Meanwhile do the frying, all of it one after another, in the same pan: 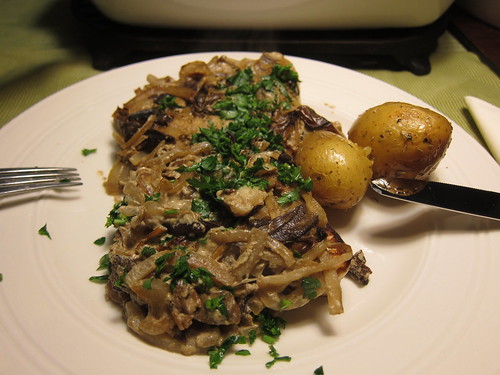 Grease a flat oven proof dish with oil and nestle the pieces of roll and meat in one layer. If there are any pieces of roll left over, you can crumble them into the onion and mushrooms. For the sauce, put in a bowl and mix:

Cover meat and croutons with the sauce and put in an oven at 180 degrees for 20 minutes. Serve with baked new potatoes (dip in olive oil, add salt, pepper and herbes de Provence and put in the oven ten minutes before the meat et al.) and the wine and finish with Lancashire.

In terms of the richness of flavour I wouldn’t rate it on par with the mock-Mexican, mock-Asian and mock-Mediterranean recipes I have described (and will describe!). To make the matters worse, the photo also doesn’t do the dish justice. But I’d venture to say that all of these shortcomings are made up for by the unmistakable aroma of wild mushrooms. So if you are contemplating a game dish, you could do worse than give filet z dzika po Białowiesku a go.