What do you do with celeriac

Having decided to live apart from civilisation, on the outskirts of a tiny hamlet, two hundred thousand souls, I am at the mercy of my local Tesco as far as food supplies are concerned. Some years ago they decided to stop carrying avocados for a few months. Imagine that! You city folks do not understand what real hardship is. Now there is no celeriac. Last autumn celeriac was in constant supply, but somehow it has fallen out of favour this year. Go figure. A really bad timing; a few weeks ago Rhik Samadder asked in the Guardian: “what do you do with celeriac?”, and I wanted to answer: “why, a salad!”, and make that salad, and eat it. But I had to content myself with the imagination of this “winter is coming” treat.

Provided you do not live in a shithole with no respectable grocery store that carries the vegetable in question, you go to said grocery store, purchase one celeriac, two large, or four small oranges, two pots of soured cream and a pack of pecans or walnuts – they taste remarkably similar to my unsophisticated palate, and both will work. Get some raisins if you manage to not have any at home – I have lived for close to forty years and am yet to run out of raisins.

You will need a good veggie peeler, since celeriac is notoriously awkward to peel, with all those protrusions, those Cthulhu-like tentacles and cavities around them that fill with dirt, it is a bit of a chore. For one portion of salad we will use half of everything. It is better to not make too much in advance and keep it, as celeriac will turn brown and look less appealing on the next day, and even less so on the day after.

Peel half of the celeriac then, and grate either coarsely or finely – the former gives more satisfying, crunchy texture, while the latter looks more fancy. Coarsely chop the nuts, peel and cut the orange or oranges, mix everything, add soured cream, and you are done. 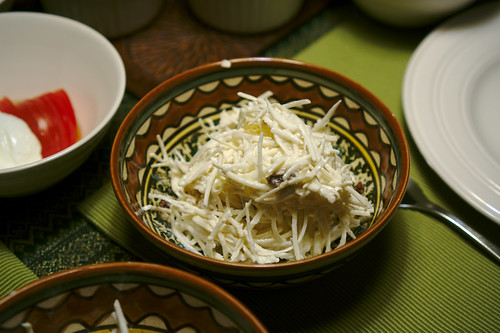 “What with the raisins?”, I hear you asking. Well, nothing in particular – one should have some in their pantry, so the shopping trip was as good an opportunity as any to stock up on raisins. Okay, okay – see, I have been making this salad for years without any consideration for raisins, and enjoyed it all the same. But something changed a year or two ago: I discovered that raisins, soaked in spirit, are like butter, or like bacon, in that they improve the flavour of any dish. There is some skill, perhaps artistry even, involved in choosing the right spirit, though. For the fruit salad it was gin, whose bitter spiciness cut through all the fructose. For this salad, the creamy earthiness should be complemented by something fruity – a good grappa does the job beautifully.