The Loin of Patience

When I was younger I could not understand the social imperative to treat people older than oneself – in particular the elderly – with esteem. In what way does having lived through a number of decades entitle one to more respect than is shown to a similarly worthy youth? With time I started to appreciate the worth of experience and accept that there are qualities that come with age. One such quality that is stereotypically associated with the elderly and denied the young is patience. I might not be particularly young, but I am impatient, and it shows in the way I cook. I take all manners of shortcuts to get to the final result quicker: cook many things together – they will all get mixed up when we eat them after all – replace time-consuming steps with ones that I imagine might yield approximately similar results, marinate meat for one hour instead of overnight, and so on. There is no denying I am a product of consumptionist society that emphasises instant reward. That said, in my book impatience is a fault, and concern with self-development means attempts to to addres one’s shortcomings. To deal with this one it seems fitting to turn towards the older generation. My mother-in-law, in particular.

Stereotypes again. Mothers-in-law are portrayed as monsters who invade upon the couple, imposing their views of how things should work in the relationship and the household, occasionally feeding their hapless children-in-law inedible fare that has to be eaten and praised, or else. Well, I’m lucky that Ania’s mum is a complete opposite of this stereotype. Among other virtues she is an excellent cook, and roast pork loin is her staple dish. Usually a simple, marinated meat roast in a bag to ensure it does not dry out, but occasionally a true masterpiece: pork loin stuffed with pork fillet stuffed with prunes stuffed with garlic. Making this will be an excellent exercise in patience, as there are certain steps which cannot be accellerated without the use of devices that are hard to come by in a home kitchen.

Having bought a large, 2 kg lump of pork loin, ideally tied with a twine, one pork fillet, a bag of prunes, a garlic bulb and some marjoram, we set to work. First, press half of the garlic and mix with salt and marjoram, and with a paste thus produced rub the loin thoroughly, then put it in the fridge. 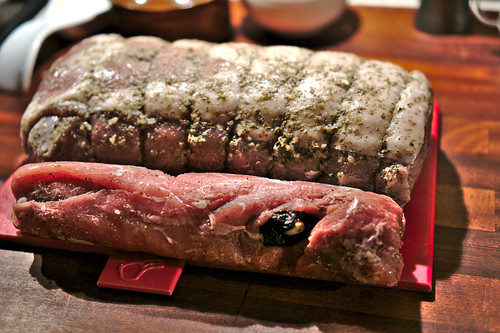 Take a thin, sharp, pointed knife and make a hole inside the fillet. Peel the remaining garlic, stick the cloves in prunes and proceed to stuff the fillet with the prunes. Then season the fillet with some cracked black pepper.

The next step will be to put the fillet inside the loin, and here comes a neat trick: the only way to do it without cutting the loin open, and thus destroying the visual effect and negatively impacting the texture, is stiffening up the fillet by freezing it. That takes time, and that’s where our patience will be put to the test. As a bonus, all the time we have to wait for the fillet to freeze thoroughly the loin will be marinating in the garlic, marjoram and salt mixture, which will ensure the meat will acquire the necessary flavour. If not for the need to freeze the fillet I would put the loin in the oven immediately!

The absolute minimum time for freezing is six hours. Ideally the loin and fillet should be left overnight, but let us not overstretch our patience on this very first attempt. Once the fillet is frozen, take it out of the freezer, take out the loin and with a large, sharp knife cleave in it an opening with enough aperture to accommodate the fillet, then stick it in. Even with a frozen fillet and large hole it is no mean feat. If we get stuck with part of the fillet sticking out and no way to push it further in, cut the fillet at the base of loin and stick the cut off part from the other end. Whatever it takes, make sure all of the fillet is hidden inside the loin. Twine ties come really handy here, without them the loin can burst into pieces, ruining the intricate design.

Put the result of the operation in a roasting dish, cover and roast at 180C for between an hour and a half to two hours. Serve hot or cold, cut into thin slices that expose the four layers of this unusual roast. 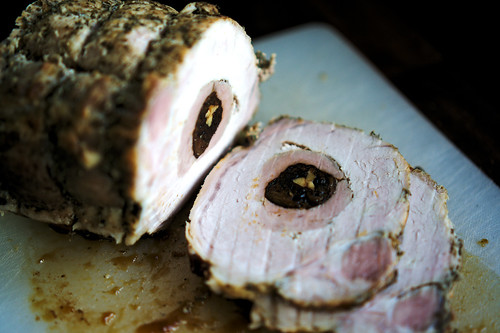