After moving to London to live on my own, I rented a one bed flat located on the top floor of a 16-story high tower block. It was a 1970s, local authority building, and the unquestionable advantages of awesome view over the city, proximity to work and affordability were somewhat counterbalanced by extreme heat in the summer, biting cold in the winter and the council tenants taking their bull terriers to relieve themselves in the lift. 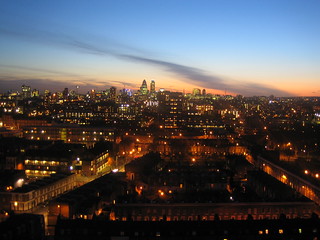 the view from the home of spaghetti with tomato sauce

I sustained on spaghetti with tomato sauce: dice a couple of tomatoes, add Herbes de Provence, a lot of pressed garlic and chopped parsley, and a spoon of tomato puree – these Lidl tomatoes could lie months on a shelf without going off, but flavour they had none; fry for a couple of minutes, meanwhile cooking the pasta al dente. Finally mix it all and add a decent amount of grated parmesan on top, plus some extra chopped parsley. Quick, cheap and delicious – I could gobble up a kilo of this stuff, so that I literally couldn’t move, that’s how I liked it.

Two years on, my girlfriend moved in, and after about two weeks of my staple diet declared that she’d rather dine on the bodily fluids and solids scraped off the lift’s wall than have another bite of my favourite spaghetti. Apparently, there was nothing wrong with the dish per se, just the frequency of it. This must have been the first time I realised you can have too much of the good thing. Turns out, once I exaggerate, that’s it – a year can pass, and Ania will still not touch it. Since then, I’m careful not to kill a perfectly good meal by making it too often, but on a couple of occasions I could not resist a new favourite and it ended with my now wife suggesting that perhaps we could order a takeaway instead. The most recent victim of my enthusiasm is a nice and simple salad, composed of ingredients available in our local Tesco’s. 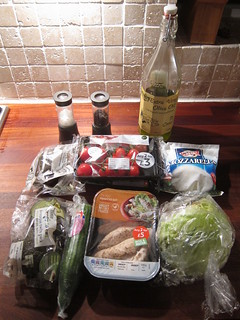 Avocado is the ultimate food; nowadays I use it in everything, even in sandwiches as a butter substitute. They used to be problematic, because these bought in shops or at the markets usually needed to ripen for a day or two. Not so Tesco’s “ready to eat”, sold in twin packs. We’ll buy three packs, i.e. six pears; if you’re not as keen on avocados as I am, four will be enough. Another Tesco’s hit are Finest Piccolo Cherry Tomatoes – there is now a deal with two for £3, so why not take four? Another deal we’ll take advantage of is two packs of flame-grilled chicken mini-breasts, £5 for two packs. We’ll also need one cucumber, one iceberg lettuce and, last but not least, mozarella, two balls. I used to use Tesco’s own brand until I tried Castelli and never looked back.

These ingredients will suffice for two large bowls of the salad, so I use half at a time. Dice everything into cubes less that 1 cm in size, put in a large bowl, add a good glug or two of unfiltered olive oil – I find Farchioni very nice – a little bit of sea salt and lots of freshly ground black pepper. Ania doesn’t eat it, so this is enough for two of my lunches and a dinner.