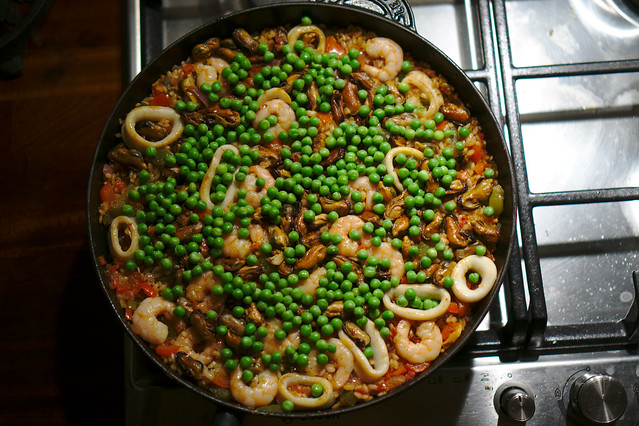 Once something is out on the internet, it’s there forever. Of course, the websites come and go, entire provinces disappear, but the information stays there in some form, in search engine caches, in the Wayback Machine, often copied across multiple sites. Or so I hoped recently, while looking for a paella recipe, which I originally found around ten years ago and then used, with some success, through the years. No luck. Oh well, we’ll have to do it from memory. As far as the ingredients are concerned, you’ll need:

Finely dice the onion and chop 3 cloves of garlic. Fry the onion on olive oil for a few minutes, until translucent, then add garlic and fry another minute or two. Then add the chopped tomatoes, a spoonful of smoked paprika and another spoonful of sweet paprika, and cook over low fire until most of the liquid evaporates. Then transfer the sofrito to a bowl and wipe the pan with a paper towel – we’ll be using the pan for all subsequent stages.

Finely dice the peppers and cook on olive oil for around 10 minutes. At the end again, transfer to a bowl (could just dump it into sofrito) and wipe the pan.

Fry the seafood on olive oil with one clove of garlic, finely chopped. If you want to be fancy, cook each type of creature – squid, mussels, prawns, whatever else you’ve got – separately, for finer control. Ideally you wouldn’t get any liquid out of the seafood, but I always do and just add it to the stock.

Make sure the stock is to hand. Add back the sofrito and peppers to the pan, along with a cup of rice. Mix it all well so that the rice is covered with the paste. Add the stock, a pinch of saffron threads (maybe two, if you’re feeling generous), and mix. Some add white wine alongside the stock; I don’t think it’s necessary or even important. Try for yourself and see.

Now, all recipes say that you should not stir the paella rice while it’s cooking. If it does burn and stick to the pan, that’s great, it’s a highly prized part of the dish. Now, I’m not so sure, so I tend to stir it every now and then, especially if the pan’s bottom is on the thin side. That said, in a nod to the tradition, I do turn up the heat for a minute or two towards the end, when the rice is almost soft. Sometimes it does produce a slightly crispier bottom layer.

Once the rice is cooked, take the pan off the heat and press the seafood into the top layer. Sprinkle freshly ground black pepper, scatter some defrosted grean peas and chopped parsley on top and leave for 10 to 15 minutes before serving.

I cannot vouch for the authenticity of this seafood paella, having never been to continental Spain, but it is tasty alright.