Commonly when preparing the main course we start with the choice of meat (if any) and the way to cook it, and then treat the vegetables, rice etc. as an addition. For today’s course I’m doing something opposite: make vegetables the cetrepiece, with meat acting as a side dish. The first time I ate something similar was in December 2009 in Lapland, with -30°C outside, so somehow naturally I associate it with winter. 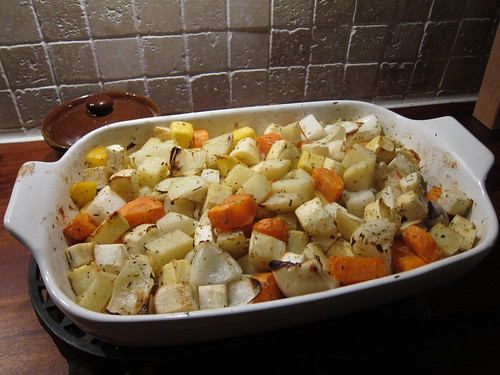 and some root vegetables. The set is not fixed, and if you can’t get something or there is one that you’d like to add then feel free to experiment. As a rule, the more different kinds of vegetable you put in, the better – just make sure they require similar amount of time to cook. This time round I’ll use:

The ingredients as listed should suffice for four servings, i.e. two dinners for Ania and me. The dish can be stored in the fridge and reheated in the oven – just cover it with some kitchen foil for storage and reheating so that it doesn’t dry out in the process. Celeriac, swede and turnips are normally sold in whole bulbs so I tend to buy twice the amount listed and have enough of the stuff for four dinners, but only half of that can fit into a standard baking dish at a time.

Right, so now that we have all that is necessary, let’s finally cook something.

Put some olive oil in the baking dish. Dice the vegetables into cubes roughly 1.5 cm in size; peel the onion and dice it in a similar-sized cubes – the layers will come apart, try to keep them together because thin pieces will cook too quickly and burn. The garlic bulb goes in as whole, just peel off the loose skin, but don’t peel individual cloves. Put everything in the dish, add plenty of herbes de Provence, season with some salt and pepper and mix so that all pieces of veg are coated in olive oil and herbs. Pre-heat the oven to 180°C and bake uncovered for 45 mins to one hour. To ensure that it cooks evenly and to prevent thinner pieces and onion from burning you might want to take the dish out from the oven and stir the contents every 15 minutes.

This can be eaten on its own, as the different vegetables provide for a variety of texture and flavour, but it’s a good idea to add some soft goat’s cheese. If you can’t imagine a dinner without meat then go for lamb; any kind – roasted shoulder, grilled escalopes or minted kebab – will suit well. When it comes to drinks have either red wine or a beer, whichever takes your fancy this cold winter evening.