From my childhood I remember that to maintain the staple lunch of a soup and a main course through the summer heatwaves, the soup had to be replaced with a cold, often milk-based concoction. It is a peculiarly eastern European thing. From Balkans to the Baltic, from tarator to cold borscht, you will find a multitude of summer recipes for a cold soup. Somehow, the westerners often find the idea repulsive. During my recent visit in Poland we tried to serve that to an American nine-year-old, but she would have none of that: “Ewww! Pink soup! Gross!”.

An approximation of one of the variants of cold borscht can be quite easily achieved here, in the UK. In my house cold borscht was made primarily from beetroot and beets, with a little bit of soured cream to make it more, well, creamy. This will be an inversion, primarily based on dairy. If you can get your hands on kefir or maślanka those would be perfect, but if not, then a 1 kilo pot of natural yoghurt will do. Get a bunch of beetroot, peel and chop into 5 mm cubes, then cook in a very small amount of water – just enough to cover it initially – uncovered, so that the liquid reduces. Finely chop some radishes (next avocado!), a bunch of dill (essential), hard-boil a few eggs. The beetroot will take at least half an hour, once cooked let it cool. Finally mix the yoghurt, beetroot, including the liquid, radishes, dill. If you used yoghurt, then press a few cloves of garlic; that should not be necessary in case of kefir base, since kefir has a bite of its own. Before serving, cut the egg – once cooled, of course – into eight pieces, and also finely chop some cucumber and mix with the soup. The cucumber could also be added immediately, but I tend to keep the chłodnik – that’s a generic Polish name for those cold soups – in a fridge for a few days, and the cucumber could get mushy and unplesant if kept in the liquid for so long.

That American girl – she did not know what she missed. 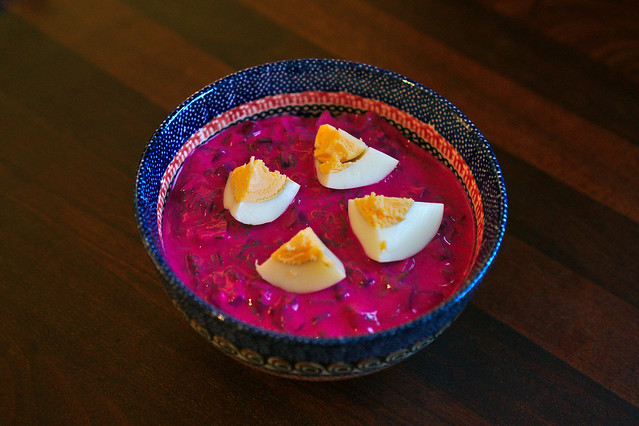