I am a fussy eater. When at primary school, I refused to partake of the simple and filling lunches we were served at the canteen, and when asked by a concerned lunch lady what the hell I am eating at home reportedly responded with veal fillet and fries. That was in soviet-era Poland, mind you, where meat was rationed, citizens were prepared to queue for hours to get hold of a frozen carcass of starved and abused chicken and brawls were commonly breaking out over who gets the right to buy the last paper-filled frankfurter. Things have moved on since then: the shelves of Polish shops are full of excellent food, queues are rarely seen other than near the checkouts, and I do not mind some offal, even as icky as chitterlings or kidneys – although I would rather not have to prepare it myself. One thing I still cannot stand though are cuts of meat that contain the non-meaty tissue such as tendons, veins, cartilage and other tough and unpleasant bits. It might therefore seem that traditional Polish dish of pig’s legs in aspic must not be one of my favourite foods. But it is.

You see, there is an advantage to all those tough pieces of connective tissue and bone: they are high in collagen, and collagen, when heated, turns into gelatine. So if we’d like to make us some jelly, these sub-prime cuts are the ones to pick. Proper pig’s legs are not a frequent sight in British supermarkets, but a hock is, and will do nicely. We’ll get lots of gelatine from that large bone in the middle! Let’s also add a pack of chicken drumsticks and thighs – they don’t contribute much in the way of jellyness or even meat, but make the dish a bit more diverse. Any other kind of pedal extremity is welcome – I’ve tried a cow’s shin in the past. Put all the meat in a large pot, add two or three carrots, some celeriac, half of an onion, burnt slightly over open fire, a couple of cloves of garlic, bay leaves, some whole black peppercorns and whole allspice. Add water, but not too much – the hock doesn’t have to be completely covered, and we want the final concentration of gelatine to be sufficient to turn it into a nice jelly. Bring to boil, then simmer on a very low heat, covered, for about four hours – but remove the carrots after half an hour or so, before they turn too soft. If the hock sticks out of the liquid, rotate it at some point so that it cooks evenly.

After four hours we remove the meat from the pot and the tedious part starts. The traditional recipe calls for all the extra tissue, bones and skin excepted, to be chopped up and used in the dish – but we (well, I) don’t want any of that in our fussy rendition. As a result we’ll need to spend a good hour separating the meat from everything else and chopping it into small, delicate pieces. 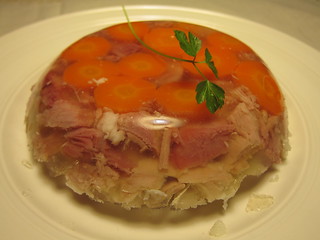 Once done with that, we slice the carrots and cover the bottoms of a couple of bowls with the slices, chop some parsley and add as well, then divide the meat between bowls and pour the stock that remained in the pot through a fine sieve into the bowls; there should be enough to cover the meat in all of them. Leave to cool and jell, then store in a fridge.

The traditional condiment used with cold legs – spirit vinegar – is another aspect of the dish that I cannot stand, but lemon juice is an acceptable substitute. Another nice, cosmopolitan variant involves the use of mayonnaise in place of acidic liquid. As you can see there is a reasonable freedom in choosing the condiments, but there can be no doubt that the only suitable drink to complement this simple but very tasty dish is a shot of very cold vodka.