I took my first steps towards independent, adult living one summer in the middle of my university course. I stayed for two months in a shared apartment in central London. It was a summer internship, well paid, but not being used to a regular income, freaked out by the prices of everything in London being a few times higher than in Warsaw, I tried to live on a very tight budget of £50 a week – that included food and tube tickets. Let it be a testament to my frugality that at the end of the eight-week internship I managed to shave enough off these weekly allowances to afford a digital camera, Kyocera FC-S3, that must have cost more than 200 pounds at the time.

Needless to say, spending money on food seemed like a wasteful luxury. I seem to recall cheddar on toast for breakfast and as a packed lunch. A lot of spaghetti in tomato sauce must also have been involved, for sure. Once I tried to make rice in a pot covered with a glass lid, which I put in an oven. The lid shattered, but I was determined to not let the rice go to waste and eat it anyway; fortunately, my more sensible flatmate talked me out of it.

My culinary experimentation usually took the form of mimicry, and the memorable summer of 2002 also marks my first foray into that territory. Fed up with the spaghetti, I recalled a particular Provençal-style soup my mum once made, and attempted to reproduce it. All I remembered was that it contained tomatoes, beans, herbes de Provence and a peculiar type of home-made dumpling, which is made with just wheat flour and egg dough (no filling), scooped up with a spoon and put in a boiling water for a few minutes. Consequently, I visited Elephant & Castle Asda store and purchased a few cans of baked beans, peeled plum tomatoes, eggs, flour, herbs, onion and garlic. It all cost about a pound, and the result was a reasonably tasty soup that lasted me a few days. I make variants of this soup until this day, though it does not cost a pound any more – both due to the monetary and lifestyle inflation.

To start with, finely chop two onions, heat some olive oil in a large pot and soften the onion on low heat for a few minutes. Add whole allspice and bay leaf, fry for another minute or two, but without browning the onion. If you would like the spicy version of the soup, you might want to add at this stage a few chillies, cut lengthwise and deseeded. Add two or three cans of chopped tomatoes in tomato sauce, mix and let it heat up. Press a few cloves of garlic, add herbes de Provence. It might be a good idea to add little bit of tomato purée for more intense tomato flavour. Pour in half a litre of stock (vegetable or chicken works well), to make it a liquid, then bring to boil. Grind in some black pepper. Add more herbes de Provence. Throw in a few cans of various types of beans – I always use butter beans and red kidney beans, cannellini or borlotti beans also work well. Bring to boil again, and boil on a low heat for 5 or 10 minutes, stirring frequently. You might want to cover the pot, since the relatively thick mixture has a tendency to sputter and make a mess of everything around.

For the dumplings, break two or three whole eggs into a pint glass, add a spoon of wheat flour and mix into a loose dough. Keep gradually adding more flour until the dough is quite thick. I usually melt a spoonful of butter and add to the dough – I am not sure how much difference it makes, but it is part of my mum’s recipe, so I am sticking to it. Bring a small pot of lightly salty water to boil, scoop bits of dough with the tip of a spoon and put them in the water. After every eight or ten dumplings, take them out of the water and leave in a sieve or a colander to drain. Meanwhile, cook the next batch; put the drained dumplings in the pot with the soup.

The soup lasts the two of us a good few days and is perfect for the cold autumn and winter evenings. Serve with chopped fresh parsley. 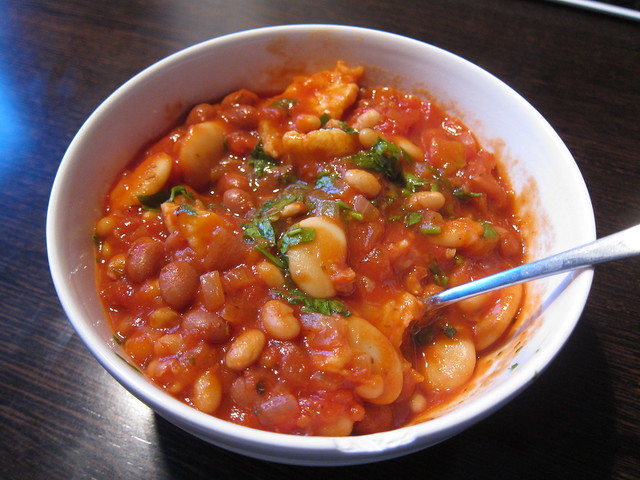