Have you heard of ketosis? No? Apparently it’s the best thing since the sliced bread, only even better, because there is no bread, so no need to slice anything. There is no bread, because ketosis is all about getting your energy from fat. Apparently a chap has done it for a year, lost weight, has better cholesterol and some other metrics, feels great. Right, count me in. But, the scientific way to do it is being very exact with amounts of all the food ingredients, and really struggling to find foodstuffs which are fatty enough. Well, we have to start somewhere, so why not with fatty salads for lunch? My favourite one would do, as it has plenty of avocado, mozzarella and olive oil, i.e. fat. I’d rather limit the risks of a monodiet by alternating it with something else. Enter the Greek salad.

I knew how to make a good Greek salad for ages, and then I saw how they do it in Peloponnese. Surprises? Just two: no lettuce, and added dried oregano. So, for the record, let’s start from scratch. Get: 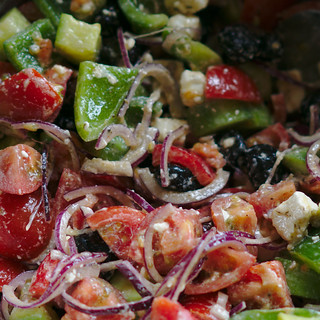 Chop tomatoes, cucumber and pepper into large chunks – another change from my old ways, I used to julienne the pepper. Slice the onion thinly. Add the olives. Now, in Peloponnese they put the whole block of feta on top, I prefer to cube or crumble it, makes it less messy to eat. Pour a lot of olive oil on top, then sprinkle some dried oregano. Mix well. Done, our ketosis dish number two is ready!