There are recipes that I gleaned from the Internet, and which I am very fond of. It would be presumptious and unfair to the fine people who first published them online to plagiarise their efforts on this humble blog. But then, if I had prepared a certain dish dozens of times, if I made custom adjustments and modifications, if the sequence of activities is so ingrained in my synapses that preparing it is like driving a car or putting my shoes on – then perhaps it is fair game, after all? There is another reason I wanted to share some of these gems. With Z not eating any living, or formerly living, creatures any more, there are few occasions for me to practice many of these great recipes, and I am worried about these perfected, personal versions of publicly available recipes being irretrievably lost. Let us then start with one of my favourites: Jamie’s fish.

In addition to extra virgin olive oil, garlic and good white wine – not cheap, cooking type, we will be drinking it! – which I assume you permanently stock, we will need:

Blend the onions and fennel in food processor; you can also finely chop or grate it by hand, but it is a tedious and lachrymose process. Also finely chop a few cloves of garlic, but keep them separate for the time being. Heat some olive oil in a large pan and add the onion and fennel blend. While it is softening up on medium heat, wash the lemon, dry it with a paper towel, and with a very sharp knife shave some peel off it; do it very thinly. A parmesan grater can be used instead, but I found shaving to produce a nicer effect. A few minutes after the onions and fennel went into the pan, add the garlic, and then, the anchovies, together with the oil they are in. Stir so that the anchovies are evenly distributed, and leave bubbling for some more minutes. Meanwhile, finely chop a few red chillies.

After a few minutes – perhaps 10 minutes in total since the start of cooking – the anchovies will dissolve. Once that happens, turn the heat up to high and add some white wine – 100 to 200 ml – and some freshly ground black pepper. Leave on high heat while the concoction reduces, which will take another 3 to 5 minutes. At the end, there should still be some liquid left. Now, reduce the heat to low and place the trout fillets on top, skin up; squeeze the juice of the lemon onto them, then add a good glug of olive oil, sprinkle the lemon peel and chillies, add some more black pepper. Cook covered for another 10 minutes, until the fish is done. Keep checking that there is enough liquid and that the mix does not stick to the pan.

Try to time the fresh pasta to be ready at the same time as the fish, remembering that it only needs about a minute in boiling water. If your timing is not impeccable, it is better to do the pasta later, while the fish rests – it is important that the past is al dente. Drain the pasta, put in bowls, add some olive oil so that it does not stick. Place some of the onion/fennel/achovy substance in each of the bowls, and then, on top of each, a whole trout fillet. Eat with the remainder of the wine used for cooking. 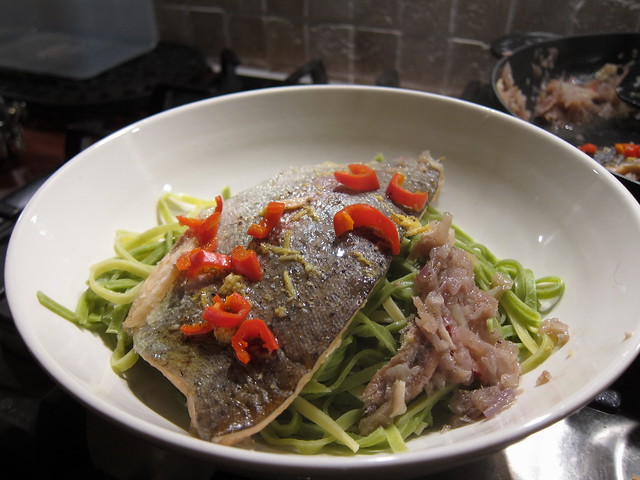 As you could probably gather from the name, the recipe is courtesy of Jamie Oliver. I would have linked to the original, but it seems to have been lost in the depths of the Internet. It might be ten years since I originally found it.