For people of occidental origin such as myself, the first degree of initiation in Wagamama’s menu is invariably Chicken Katsu Curry. Those who dare to abandon the comfortable familiarity of breaded chicken, rice, and sauce not altogether unlike the gravy often served with traditional English pies will arrive in the land of wok-fried udon noodles – that’s the second degree, and this what I have so far achieved. I can only guess what happens further, but would venture a supposition that one must at some point attain the level of a bowl of ramen, which, according to Wagamama’s own advertising, seems to be what every fashionable young person orders there.

I happen to own a Wagamama’s cookbook. Once, in Basildon’s Eastgate shopping mall, in a inconspicuous Chinese shop which mostly deals in martial arts accessories, but also happens to stock some alimentary provisions for warriors of the East, I stumbled upon a pack of udon noodles, and purchased it with the view that it can be used with one of the recipes from said book. 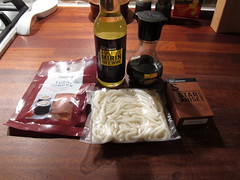 A couple of months have passed and I have finally decided to have a go. A cursory look at yaki udon recipe made it clear that the chief purpose of the book is to encourage the peruser to abandon all hope of preparing the meal at home, and instead go to the closest Wagamama restaurant and order the food there. The ingredients list mentions not fewer than three sauces, preparation of each requiring a mixture of various kinds of soy sauce, different types of sake, and a lot of time. On top of that there are things like chikuwa (the book helpfully says, that this ingredient in general can be omitted without much damage to the dishes), dried shallots, and spicy fish powder.

Obviously, we’ll be alright without all this fancy rubbish. Instead, we’ll grab whatever Japanese can be found at the local supermarket and make do with that. I happened to find a pack of pickled ginger – gari – and a bottle of rice wine for cooking. There’s also always some wasabi, but it won’t fit well with this dish.

The three sauces alluded to above were yakitori, yaki soba and curry oil. We’ll take a shortcut and make a single one that combines all – and in a fraction of time required for proper preparation of just one of them. 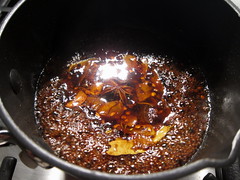 First, very thinly slice a garlic clove and a similarly sized piece of fresh ginger. Heat some vegetable oil in a small pan. Add star anise and a bay leaf and let it fry for half a minute or so. Then add the sliced garlic and ginger, some dried chilli flakes, smoked paprika, and some ground cinnamon, turmeric and cumin. mix everything and fry for another thirty seconds. Then add about 50 ml or so of light soy sauce and similar amount, of rice wine – if you don’t have that a regular white wine will do. Add two cubes of brown sugar and a small pinch of salt. Bring everything to boil, then remove the star anise and bay leaf. Boil on high heat for a minute or two, until the mixture begins to thicken. Remove from the heat and put outside of the window to cool. That’s our sauce.

The udon I bought was vacuum-packed and soft already, it was sufficient to throw it into a pan of boiling water for two minutes, then drain and put for a while under cold running water. 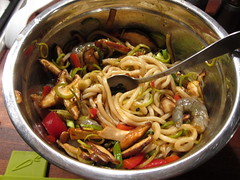 Once drained, put the cooked udon in a large bowl. Add a pack of peeled king prawns (ideally raw), half of a leek, sliced in pieces 1 mm thick, a couple of salad or spring onions, cut in 2 cm long pieces, a handful of beansprouts, half of of sweet, red pepper, cut in thin batons, some five or six slices of gari and some dried onions (a much easier to buy substitute for dried shallots). Thinly slice half of a box of shiitake mushrooms and add to the bowl as well. Finally, retrieve the sauce from outside – it should have completely cooled by now – pour in the bowl and mix everything together so that all the ingredients are covered in the sauce.

Put a wok or a large pan on very high heat. When the wok is very hot pour in some vegetable oil and wait until it heats up so that it is smoking. Throw the contents of the bowl into the pan and stir fry on maximum heat for two or three minutes, until the prawns are thoroughly cooked. Serve with lager – Asahi or Tyskie. 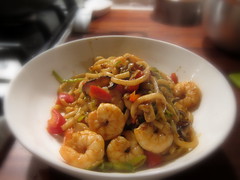